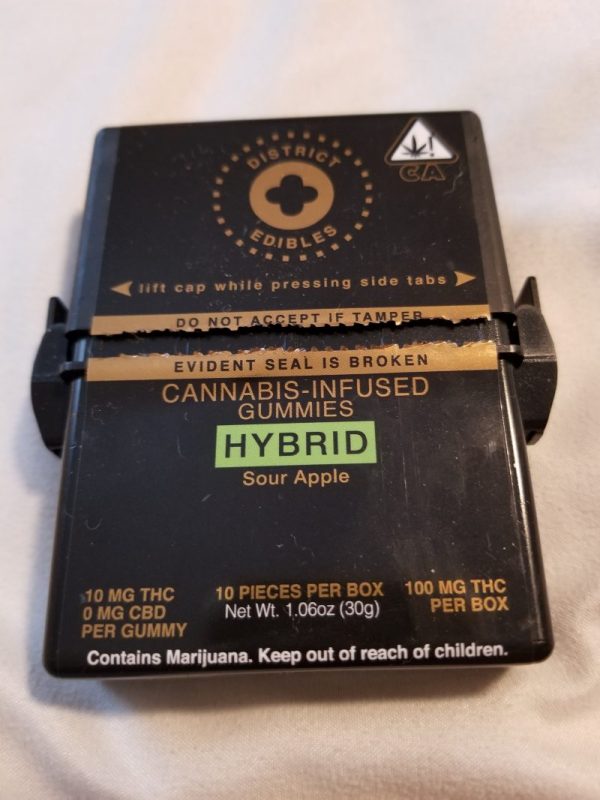 Taste was like sour apple but i’m going to be honest it had a nasty sugary after taste and not much of a sour taste at all.

Regardless I managed to scarf them down quickly, anxious waiting for the effect to come.

So as mentioned earlier I waited and waited for the effect and once it kicked in it was pretty disappointing.

Especially for a hybrid

Simply put, FOR ME this product had no real kick or head change.  More of a sluggish sleepy high which was more than disappointing.

When you experience a good edible you can be chillin with homies and baaaam the weed hits then it’s all smiles.

Not with this one at least not in my particular case.

Lazy, tired no real kick to this edible,.

Man, honestly I’m not even trying to throw shade.

My local dispensary had these on sale so I said “why not?”

decided to give them a shot but the potency was lacking and the taste was sub par.

Do they have a strong cannabis oil taste?

No, as most edibles nowadays are a lot better about the chlorophyl weed taste this edible is no exception.

Personally for me, it’s a big plus however this edible comes in lacking because if someone asked me to describe the taste it would be as such:

A sad attempt at sour apple but really tastes like it comes from some pharmacy somewhere.  Tastes medicinal with a lingering and overwhelming sugary taste.